Support and Reinforcement in the Mining Cycle

The most commonly used mesh is probably welded mesh made of approximately 5 mm thick steel wire and having 100 mm square openings. The steel wire may be galvanised or not. The alternative has been an interwoven mesh known as chain link mesh.
The disadvantage of traditional chain link mesh compared with weld mesh has been the difficulty of applying shotcrete successfully through the smaller openings available.
This difficulty has now been overcome in a high strength, light weight chain link mesh with 100 mm openings which is easy to handle and can be made to conform to uneven rock surfaces more readily than weld mesh. 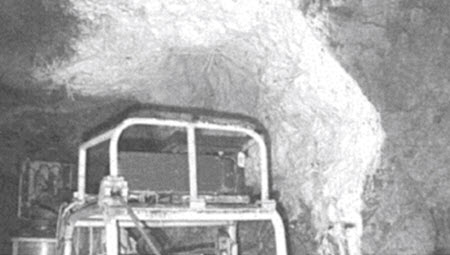 A feature of this mesh is the fact that the intersections of the wires making up the squares in the mesh are twisted rather than simply linked or welded. Roth et al. (2004) describe static and dynamic tests on this mesh.

Mesh of this type is being used successfully at the Neves Corvo Mine, Portugal, where it has been particularly successful in rehabilitating damaged excavations. Li et al.
(2004) report that this mesh is being trialled by St Ives Gold, Western Australia. Tyler & Werner (2004) refer to recent trials in sublevel cross-cuts at the Perseverence Mine, Western Australia, using what a similar Australian made high strength chain link mesh. It is understood that completely satisfactory mechanised installation methods have yet to be developed.
In this symposium, Hadjigeorgiou et al. (2004) and Van Heerden (2004) discuss the use of cementitious liners to support, protect and improve the operational performance of ore passes in metalliferous mines. One of the benefits of cementitious liners is the corrosion protection that they provide to the reinforcing elements. Both papers emphasise the need to consider the support and reinforcement of ore passes on a cost-effectiveness basis taking into account the need to rehabilitate or replace failed passes. The author has had the experience of having to recommend the filling with concrete and re-boring of critical ore passes that had collapsed over parts of their lengths.
Although their use was referred to at the 1999 symposium, there have been significant developments in the use of thin, non-cementitous, spray-on liners (TSLs) since that time (e.g. Spearing & Hague 2003). These polymer-based products are applied in layers of typically 6 mm or less in thickness, largely as a replacement for mesh or shotcrete. Stacey & Yu (2004) explore the rock support mechanisms provided by sprayed liners.
The author’s experience at the Neves Corvo Mine, Portugal, is that TSLs are useful in providing immediate support to prevent rock mass deterioration and unravelling in special circumstances (Figure 2), but that they do not yet provide a cost-effective replacement for shotcrete in most mainstream support applications. In some circumstances, they can be applied more quickly than shotcrete and may be used to provide effective immediate support when a fast rate of advance is required. Recently, Archibald & Katsabanis (2004) have reported the effectiveness of TSLs under simulated rockburst conditions.
Overcoming the limitations and costs associated with the cyclic nature of underground metalliferous mining operations has long been one of the dreams of miners. More closely continuous mining can be achieved in civil engineering tunnelling and in longwall coal mining than in underground hard rock mining. Current development of more continuous underground metalliferous mining systems is associated mainly, but not only, with caving and other mass mining methods (Brown 2004, Paraszczak & Planeta 2004).
Several papers to this symposium describe developments that, while not obviating the need for cyclic drill-blast-scale-support-load operations, will improve the ability to scale and provide immediate support and reinforcement to the newly blasted rock. Jenkins et al.

Neindorf (2004) also refers to the possibility of combining hydro-scaling with shotcreting to develop a new approach to continuous ground support in the development cycle at Mount Isa. These developments form part of the continuous improvement evident in support and reinforcement practice in underground mining.
As was noted at the 1999 symposium, although backfill has been used to control displacements around and above underground mining excavations for more than 100 years, the great impetus for the development of fill technology came with the emergence of the “cut-and-fill era” in the 1950s and 60s (Brown 1999a).

It was also noted that fill did not figure prominently in the papers presented to that symposium. A few years earlier, paste fill made from mill tailings and cement and/or other binders, had been developed in Canada (Landriault 2001). Since that time, the use and understanding of paste fill have increased dramatically, so much so that Belem et al. (2004b) suggest that it is “becoming standard practice in the mining industry throughut the world”.
Cemented paste fill is now used with a range of mining methods including sublevel open stoping, cut-and-fill and bench-and-fill. In some applications, it is necessary that unsupported vertical paste fill walls of primary stopes remain stable while secondary stoping is completed. In common with Landriault (2001) and Belem et al. (2004a), the author has had success using the design method proposed by Mitchell (1983). A particular requirement in some applications is to include enough cement to prevent liquefaction of the paste after placement (Been et al. 2002).
In two papers to this symposium, Belem et al. (2004a, b) discuss a range of fundamental and applied aspects of the use of cemented paste fill in cut-and-fill mining generally, and in longhole open stoping at La Mine Doyen, Canada. Varden & Henderson (2004) discuss the use of the more traditional cemented rock fill to fill old underground mining voids at the Sons of Gwalia Mine, Western Australia.

So many credit card offers, what to do?